Futtsu, in the Chiba Prefecture in Japan, shares a coastal similarity with Carlsbad. Located on Tokyo Bay, if enjoys water sports, aqua farming and tourist attractions such as the Mother Farm, Community Sports & Culture Park, the rare Golden Monkeys’ Preserve and the Tokyo Bay Kannon statue of the Goddess of Mercy, a 56 meter high monument to world peace. It was proposed as a sister city by the notable man of peace, Mr. Yoshiro Fujimura.

In the Czech Republic goes back to 1370 when Holy Roman Emperor Charles IV recognized the Bohemian city of Carlsbad (now Karlovy Vary) for the curative powers of its hot mineral springs. It was visited by Goethe, Peter the Great, Beethoven, and Chopin and remains Czechia’s most visited spa destination to this day. It is now one of the UNESCO World Heritage designated Great Spa Towns of Europe (https://whc.unesco.org/en/list/1613/) .

The water in Carlsbad, California was found to have remarkably similar mineral properties to Karlovy Vary and in honor of this connection our city was named Carlsbad. Frazier's well, a state historical site at Alt Carlsbad, features a statue of Frazier sculpted by former Karlovy Vary Mayor Vaclav Lokvenc. Karlovy Vary retains its forested and mountainous grandeur, old-world elegance and china, gem and glass industries. We established the Sister City relationship with our namesake city in 1991.

Home-stay exchanges, student and group travel opportunities, arts and culture, sports and business seminars allow Carlsbad, Futtsu and Karlovy Vary to learn about and benefit from each other. Hundreds of people from all three cities have now discovered how enriching it is to be part of an international family.

Periodically Carlsbad families host home-stays with students from Futtsu and Karlovy Vary. We too have sent several students to visit our sister cities abroad.
We have also sponsored juried art competitions and sent the winning art for exhibit abroad as well as exhibiting their art here in Carlsbad. CSCA is planning new exchanges and trips to our sister cities and welcomes our area’s dynamic internationally interested citizens to share in the cultural highlights here and abroad. Please sign-up on our home page to receive offers and announcements.

Steve Komine, longtime CSCA supporter, benefactor and past president of Jupitor Corporation, passed away recently. He will sorely be missed. RIP. 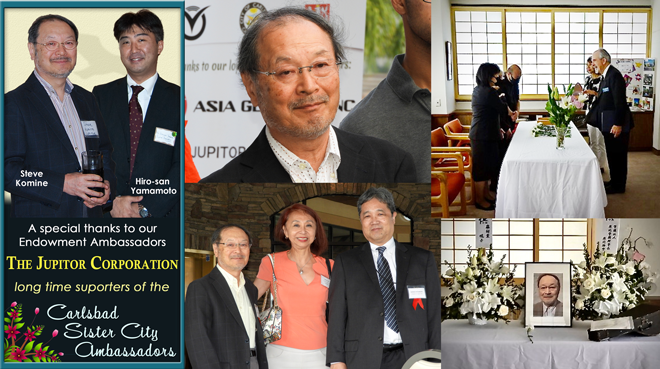 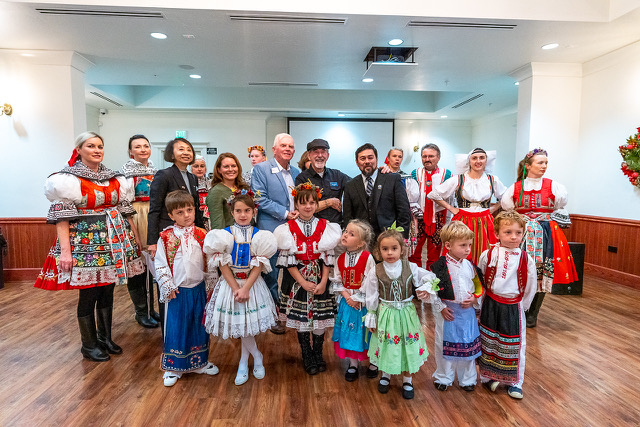 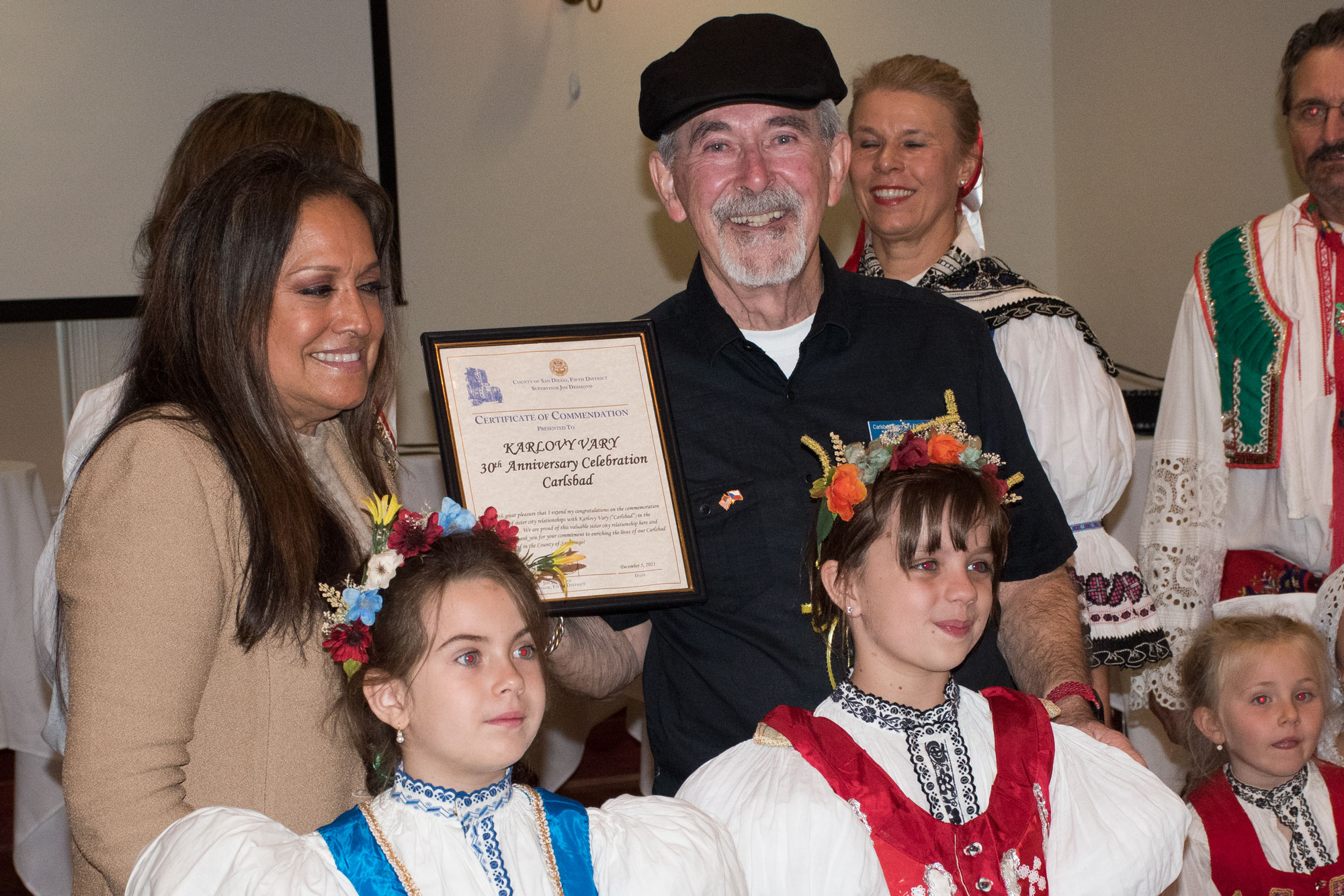 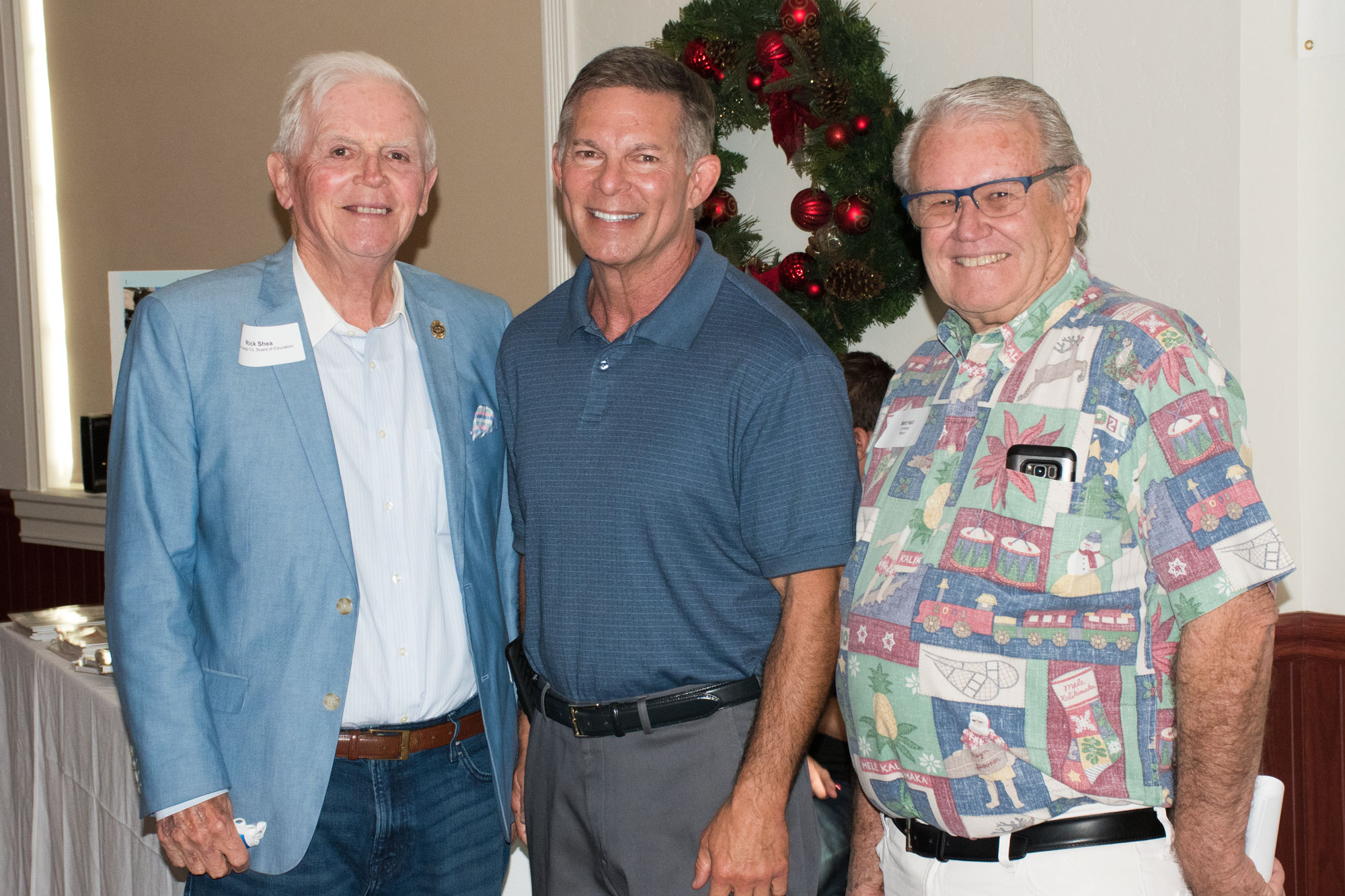 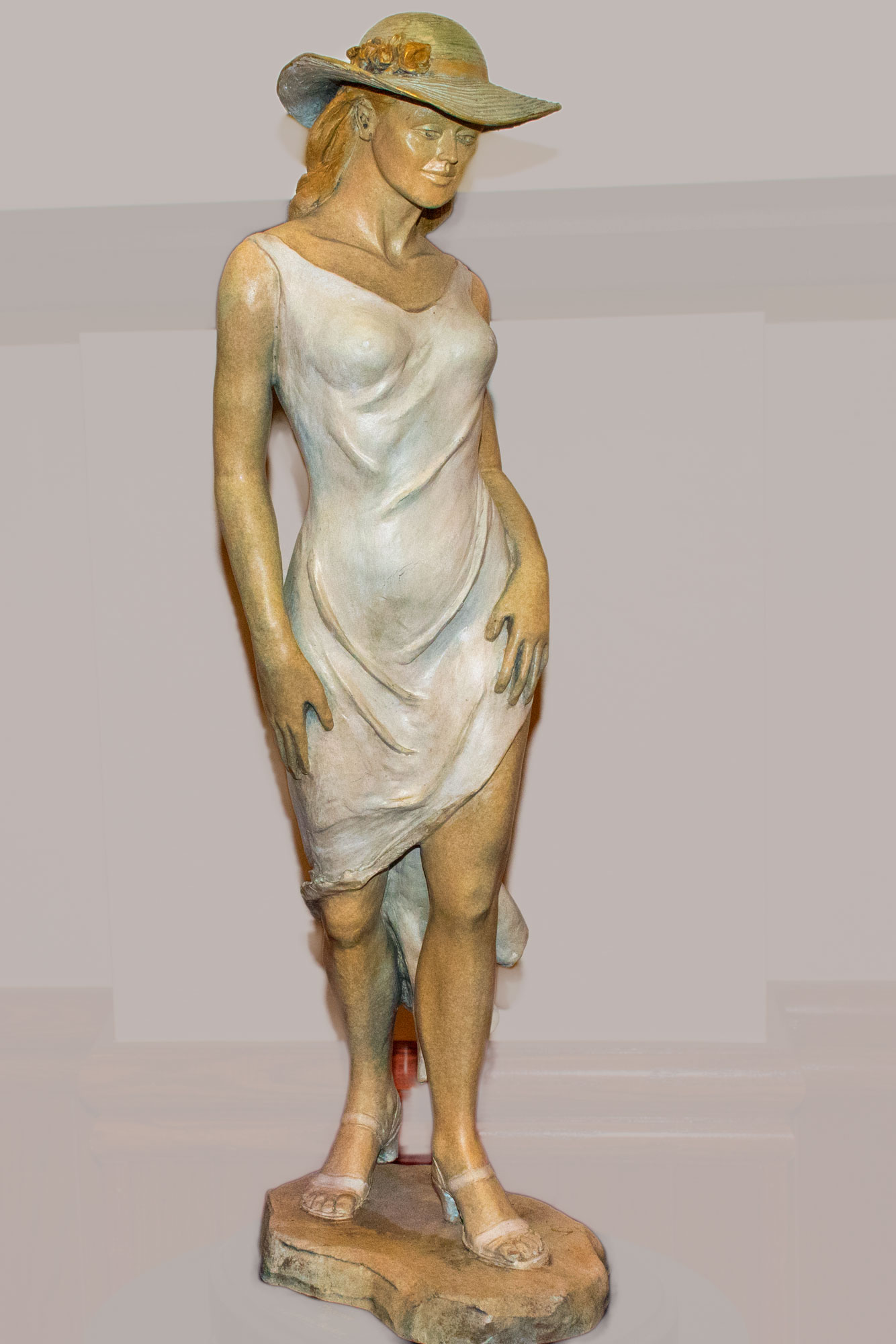 It featured Czech Dancers, Music, a toast with Karlovy Vary’s own Becherovka, slides of Karlovy Vary’s Festive Openings of the past. Complimentary hand-painted Czech commemorative egg ornaments were gifted. A statue crafted by our own Laurenn Barke,r to be gifted to Karlovy Vary, was unveiled and presented at the celebration.

V. A Celebration of Peace!

Carlsbad joined with its Japanese Sister City of Futtsu, Japan via Zoom for a brief bell-ringing (75 rings) on August 5, 2020 at 4:15 PM our time.

This was to commemorate 75 years of peace since the atomic bomb fell on Hiroshima, Japan.

This brief ceremony began with photos of the beautiful Hiroshima Peace Memorial Park, brief words from friends and officials and then ours and their bell ringing.

The entire commemoration took about 25 minutes.

Promoting peace through mutual respect, understanding and cooperation - one individual, one community at a time,

VI. SoCal Sister Cities were welcomed to the home of the new Consulate-General of Japan in Los Angeles. 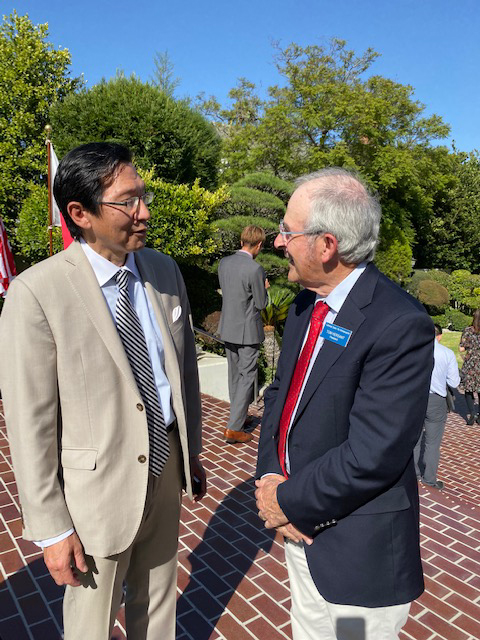 CSCA President Tom Hersant attends the installation celebration of the new Los Angeles Japan Consul General Akira Muto. Regarding sister cities, the new Consul General mentioned to Tom, "...what you do is close to my heart. I consider citizen homestays and visits the bed rock of diplomacy. Just remember if you ever need us, I have your back!" 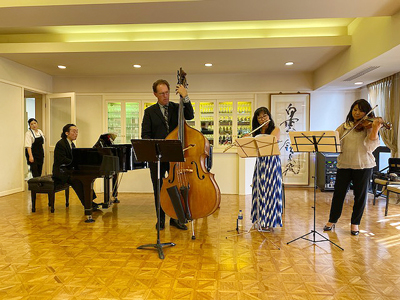 VII. Fresh off their visit to our sister city Futtsu, Japan and surrounding areas this summer, Carlsbad Youth Ambassadors made presentations to the City Council relating their experience. 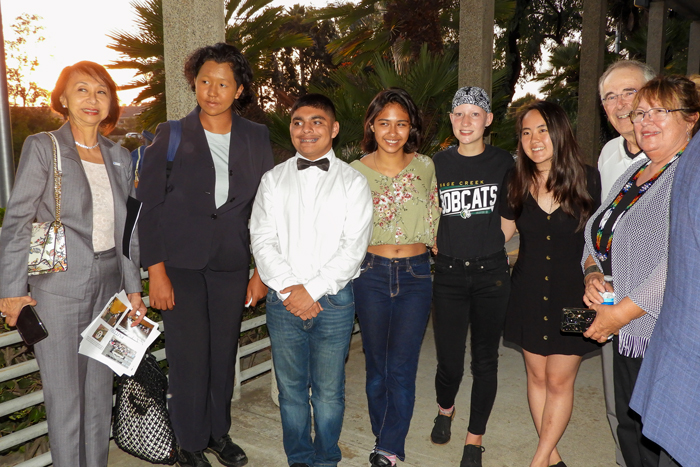 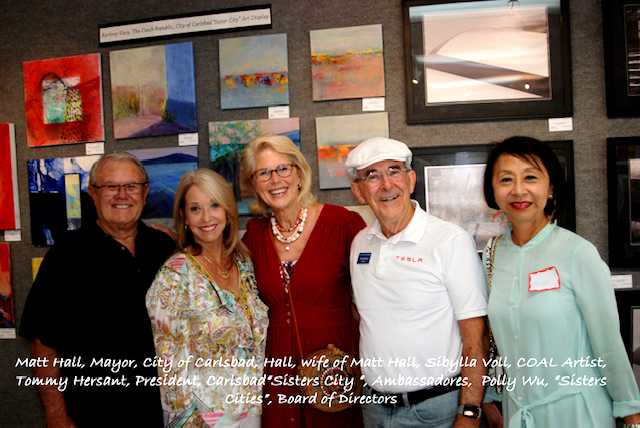 XII. CSCA and COAL sponsored an art exhibit in sister city Karlovy Vary,Czech Republic, May 4, 2018 for our talented local artists:

XIII. Making new friends. Memories that last a lifetime! An essential part of the Carlsbad community. 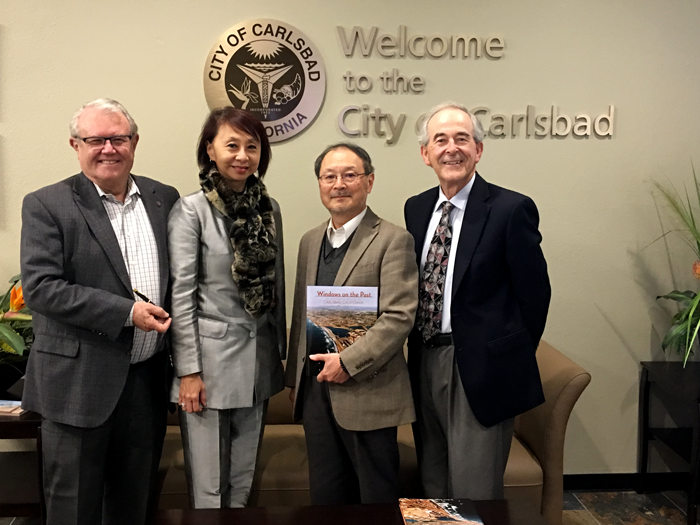 Recently Mr Susumu Komine, Advisor of Jupitor Corporation USA, visited our City to congratulate CSCA on the 30 year relationship between Carlsbad and Futtsu. Carlsbad Mayor Matt Hall met him today and they shared many fond memory of previous friendship visits between the 2 cities. Also in attendance were CSCA directors Polly Yu and Tom Hersant. In August 2018, the mayor of Futtsu will visit the City of Carlsbad with a group of citizens from Futtsu. This is a great opportunity to showcase our beautiful city of Carlsbad to Futtsu, Japan.

XV. A Rotary Club of Carlsbad fundraising event was held on with Tom and Tonya Hersant, Polly Yu and Phillis Hall representing CSCA. 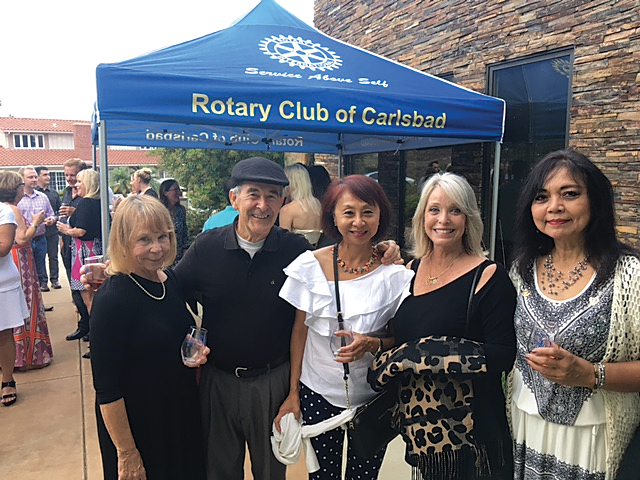 XVI. In 2017 CSCA sponsored a Spring Tour to Vienna, Budapest and our sister city Karlovy Vary, CZ and was a great success: 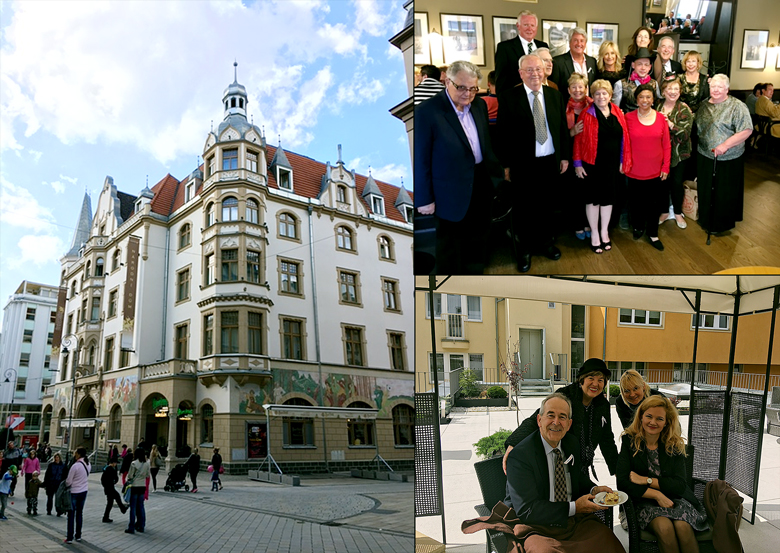 XVII. The Laurel Tree Planting and Plaque at McGee Park

Last year, artworks of six members of COAL, Diane O'Connell, David Schlegel, Ellie Havel Thomas, Lois Athern, Rita Shulak, and Sibylla Voll were juried and displayed in Karlovy-Vary, Czech Republic, as part of the City of Carlsbad's Sister-City program, This year in June, the COAL Gallery will be hosting artists Vaclav Balsan, Varvara Divisova, Jiri Kozisek, Lenska Maliska Sarova, and Jan Semec from Karlovy-Vary as part of the exchange. COAL hosted the Reception at the Gallery on June 12, 2016. At the reception the Mayor of Carlsbad, dignitaries of the City, and representatives of the Sister Cities program were in attendance. 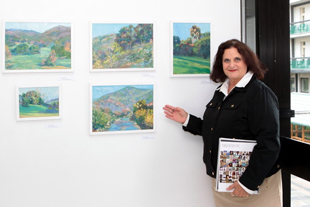 An exhibition of art work by six C.O.A.L. member artists selected in February by CSCA opened this week in Karlovy Vary. Honored artists, who each have five works of art on exhibit, are Lois Athearn, Diane O’Connell, David Schlegel, Rita Shulak, Ellie Havel Thomas, and Sibylla Voll. The opening reception in the Municipal Gallery was on July 29, 2016, according to Jacquie Thye, Founding member and Director of Carlsbad Sister City Ambassadors, who coordinated this event. The exhibition of the Carlsbad artists will run through the month of August in Karlovy Vary’s Thermal Building.

Petr Kulhanek, the Honorable Lord Mayor of Karlovy Vary, and two of his deputies, came to visit Carlsbad in 2013. It was at this time he extended an invitation to have an International Art Exchange take place between our two sister cities. Karlovy Vary will reciprocate by sending their artists’ works in June of 2016 to be exhibited in the Carlsbad-Oceanside Art Gallery in Carlsbad.

See a our COAL artists with their works exhibited in Karlovy Vary. 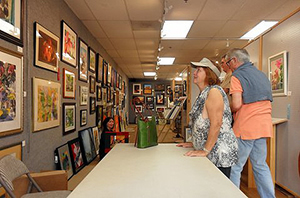 A collaborative venture of CSCA and C.O.A.L. answered the invitation from Petr Kulhanek, the Honorable Lord Mayor of Karlovy Vary,  to have an International Art Exchange take place between the two sister cities.

C.O.A.L. artists were invited to enter the competition.  There was an enthusiastic response, according to CSCA Director Jacquie Thye, who coordinated this wonderful cultural event.

The art will be on display in the heart of this world-renowned spa city during the month of August.  Karlovy Vary, located near Prague, draws visitors to its many international festivals.

All of the artists were excited to learn they were chosen and hope to go to Karlovy Vary in person for the opening of the exhibition.

Karlovy Vary artists will then send their art work to Carlsbad in June 2016.  It will be exhibited at the C.O.A.L. Gallery and it is hoped several artists will visit as well.

Carlsbad Sister City Ambassadors was pleased to pay tribute to the 25th year of our relationship with Futtsu, Japan by planting cherry trees at the Carlsbad City Hall and the La Costa Heights Elementary School in April. One of our directors, Vesta Rundle-Ross, was instrumental in getting the trees from the Japanese Friendship Gardens in San Diego. Three of the trees were planted on the City Hall property as part of Carlsbad's Arbor Day at 11:00 a.m., April 26, 2014.  Also a plaque was installed at the site stating that the trees honor our Sister City relationship with Futtsu. Longtime friend and resident of Futtsu Tomiko Takenouchi and Daiji Mizota, Director, Futtsu International Relationship Association, traveled from Futtsu to attend. A fourth tree was planted in a separate ceremony at La Costa Heights Elementary School earlier on April 23. This was the school that was visited by the Futtsu delegation to acknowledge their collection of funds to help in the recovery from the tsunami damages of 2011.

The Carlsbad Sister City Ambassadors is pleased to have hosted the Lord Mayor Petr Kulhanek with his Deputies Petr Bursík and Jiří Klsák from our sister city Karlovy Vary in the Czech Republic. This was the Lord Mayor's first visit to Carlsbad. The week before, CSCA hosted the delegation from Futtsu, Japan comprised of Mrs. Tomiko Takenouchi, Mr. Shigeru Takenouchi, Mrs. Kiyoe Hasegawa along with students Woohyun An, Kana Morita, Yuuna Iwasawa, and Yuuya Matsuda.